Building on last year’s #1 poker title and the number one brand in poker, World Series of Poker: Tournament of Champions takes a story-based approach as it puts players on the Circuit as a newly turned poker pro and under the wing of Chris “Jesus” Ferguson as his protégé. Players will test their skills against the world’s best poker pros in the premier Circuit Events in hopes of qualifying for the winner-take-all, invitation-only Tournament of Champions at the Rio Resort in Las Vegas. Along the way, players will face-off against more top pros than ever before, including: Joseph Hachem, the 2006 World Series of Poker Main Event Champion; Jennifer Tilly, the Academy Award nominated actress and World Series of Poker bracelet holder, and many others in hopes of bringing home the Tournament of Champions trophy. More Pros Than Ever Before – Your poker skills will be put to the ultimate test by over 20 of the world’s top poker champions – the most extensive collection of pros in any video game. You’ll be expected to go all-in against the likes of Scotty Nguyen, Scott Fischman, Men “The Master” Nguyen, Clonie Gowen, T.J. Cloutier, Eric Seidel, Antonio Esfandiari and many others. Plus all the action will be called by the hilariously creative commentator team of Norman Chad and Lon McEachern. Learn from the Best – This is not just a sequel to last year’s #1 selling poker video game. This is a high-stakes game where you check your amateur status at the door, enter life as a poker pro, and head out on the Circuit. You’re not alone, though as you’ll be under the tutelage of Chris “Jesus” Ferguson, winner of five World Series of Poker bracelets. He’ll teach you his most closely held tips, tricks, and strategies that have solidified him as one of the world’s best poker players. But it’s up to you to learn them and to put them into practice at one of the world’s toughest poker stages – The World Series of Poker’s Tournament of Champions. Unlockable Poker Tools – With successful wins, you will unlock valuable poker tools that will enable you to become an even more skillful player. Unlockables include the ability to instantly check your odds of hitting various hands at the pre-flop, flop, turn and river, check the ranking of your hand, and even check valuable statistics on your opponents’ style’s of play such as the percentage of flops each has seen or and percentage of pre-flop raises. DigiMask Technology (Xbox 360 only) – Put your face in the game with the proprietary DigiMask technology specifically licensed for this title. With this technology you can use your Xbox 360 camera peripheral to map your likeness onto your in-game character! It’s time to show your poker face. Expanded Online Multiplayer (console only) – Experience new online features such has hosting multi-table tournaments for the hottest poker action, reading tells from your online opponents via the camera to give yourself an advantage, or even have a little fun by testing your psychic skills in a side game of “Blind Man’s Bluff.” Portability and Interoperability (PSP and PS2 only) – Now players with PSPs and PS2’s can challenge each other in multi-player competition with interoperability between these two Sony units. Have both? Well, you can port your profile and career between your PSP and PS2 gaming units and not lose a beat on your collected wins. 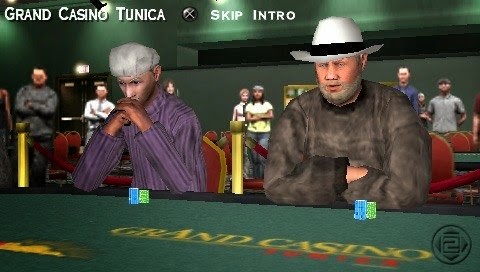 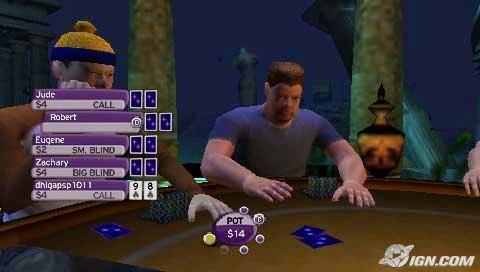