Take a wild ride through the action packed streets of the original Dreamcast games, Crazy Taxi and Crazy Taxi 2, on the go. Only skilled cabbies need apply for Crazy Taxi: Fare Wars, where drivers need to be more aggressive than ever to earn the big money by speeding fares to their destination, no matter what the obstacles. Drive through the two original maps of Crazy Taxi, both inspired by the steep hills, trademark cable cars, and breezy waterfront of San Francisco. Then head for the Small Apple maps in Crazy Taxi 2, which is inspired by New York’s large building fronts, hectic downtown streets, and the city’s famous Central Park and subway system. And for the first time in Crazy Taxi, two players can race for fares in multiplayer mode, stealing passengers from other cabbies by bumping their opponent’s car creating chaotic competition on the road or playing cooperatively as you aim for the big tips. 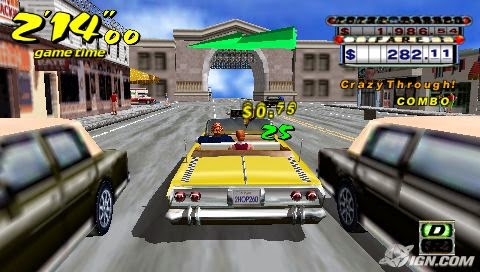