Although Craneballs Studios have had success with games like Super Fall and Mono Race on the iPhone, they are yet to release anything on the PSP. That is, until now. Blimp: The Flying Adventures was a hit on the iPhone/iPod Touch, but how will it do on the PSP, ported, enhanced and published by Grip Games? You play as Captain Zed Pelin, a veteran of a recent war who is now working for a merchant air transport company. Your objective is to collect precious cargo and transport passengers to their destinations throughout each area of the planet Solbot, within the allotted time. The story is told through various static black-and-white drawings at the start of each stage, and although this may seem a little half-arsed, the artwork is amazing and feels like something straight out of a comic book. Blimp: The Flying Adventures has three levels of difficulty, with Easy having no time limit to complete the stage, giving the player the opportunity to play through each stage at his or her own pace. While Medium and Hard modes both have a time limit in which to complete the level, the only difference between the two difficulties is the health meter, with Hard mode only giving you half of your full health. Although this doesn’t make much of a difference in the first few stages, you will find the loss of health will make the missions much harder as you progress through the game. Fortunately, there are a few health packs scattered around each stage to help you through the level. There are other helpful items to find throughout the game as well, providing boosts such as extra time and extra ammo, and also what look like gems for you to collect for bonus points at the end of each stage. To make your job harder, you have to not only navigate your blimp through different hazards for each environment but also defend yourself from enemy tanks, blimps and turrets. There are twenty stages in total for you to work your way through, requiring different tasks such as transporting passengers from one location to another or collecting a certain amount of cargo. Each stage is beautifully designed, with different areas for you to navigate your way through; for instance, you will be piloting your blimp through arctic tundra in one stage, while another stage is set in a toxic waste ground. I found the controls a little hard to master, as they are a bit sensitive. For example, if you push the analog stick too far, your blimp will be launched across the screen, but that adds to the challenge. You can’t just whiz through each stage at 100 mph; you would fly into hazards or bounce off walls, which in turn would damage your blimp. In my opinion, there are very few faults with the game, but there is one worth pointing out: when you are being attacked by an enemy, occasionally you will find your ship taking damage from a missile that should in fact have flown straight past your blimp. Although this happens only every so often, it still makes things a little frustrating when trying to complete a level, especially when you have very little health, and that hit kills you. Unfortunately, like most games similar to Blimp: The Flying Adventures, after completing the game, you have very little incentive to go back and play it again, unless you want to try to beat your previous score. With that being said, though, you will find yourself spending many hours making your way through each stage on each difficulty level and admiring the artwork in this game. Some may feel the $4.99 price tag a little high, but I feel it is well worth the cash. 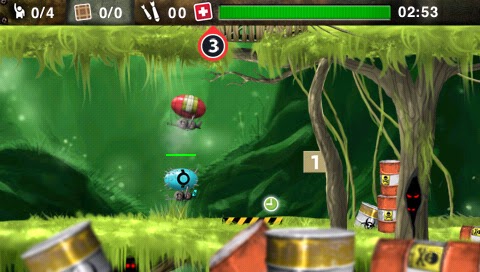 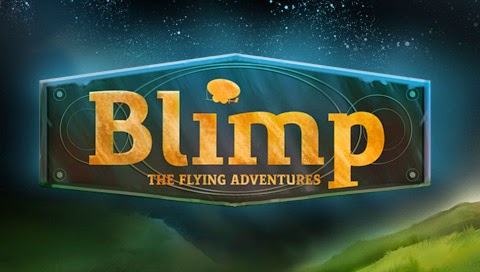